I’ve been playing Ingress for roughly two months. So far I’ve reached level 5, I’m now 50% of the way to level 6. One of the things I’ve wanted to do is write about the mechanics of game balance in Ingress, but that post has been sitting as a draft for a few weeks. Something has since then came along and changed the picture quite considerably!

Recently, a game-changing update came into force: portals linked to other portals are more difficult to destroy. I think this is a fantastic move, despite being in a city completely dominated by the opposing faction! (Boo, Smurfs).

As you progress through the levels of Ingress, you start to care less about the ownership of an individual portal and more about the spatial distribution of portals. Higher-level players take on a social role of weakening portals so that low level players can finish them off and reap the AP. Higher-level players think about creating pop-up portal farms – that is, capturing lots of portals close together and hacking them until they burn out (which is four hacks per four hours on each portal).

The problem with this approach is that as you get to higher levels there is little incentive to creating links and fields, unless you’re one of the dedicated players who will try to establish fields the length of a country just for fun. Destroying links and fields gives the opponents more AP. Once you get to level 8, the max level, there’s no incentive to link because you don’t need the AP! Previously, adding lots of links and fields to a portal added no value to your team, instead they act as a big advertising billboard for the enemies – COME GET ME!

Now, highly-linked portals have higher defensive capabilities, meaning they can be exploited for weapons by your team. Combined with another update, that firing a weapon requires you to expend some XM, this means that there is an incentive for a team to build and maintain highly-linked portals. After all, in the storyline this is a global competition to create fields, yet the end game discouraged this! Historically Ingress has always been in favour of the attacker – even a well-stocked level 6 player could decimate an entire town. This redresses the balance a bit.

Of course, attackers have a new item too. A power cube can be obtained from hacking a portal. They essentially act as a battery, restoring XM up to a certain value. So if you’re planning a big attack, you have the opportunity to recharge yourself a few times. Don’t leave home without them!

Earlier, I mentioned that this was a good idea even in one-sided environments. Newcastle-Upon-Tyne is heavily controlled by the Resistance. Their portals are well-linked and well-maintained: 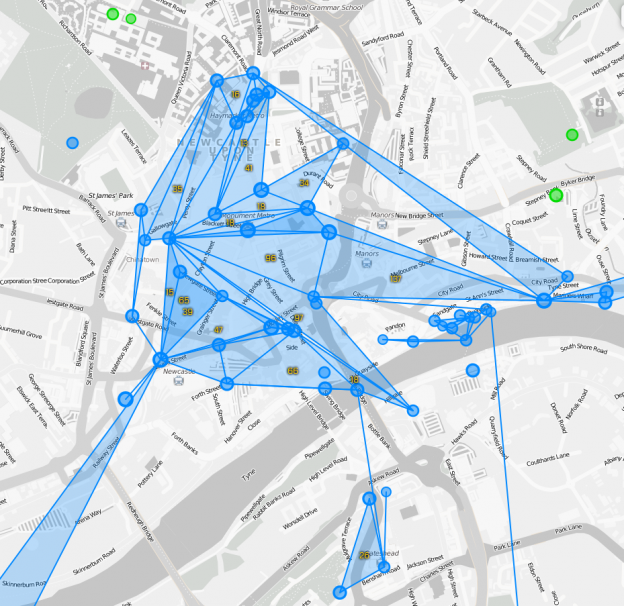 Any attack on their portals is fruitful, but temporary. Due to the fact that Ingress favoured attackers, we have slowly managed to pull ourselves up through the levels. We can now nearly give as good as we get, but there’s a few of us who still need to level up a bit more to be effective. How did we do this? By organising and socializing! These have always been the goals of Ingress – you’re a faction, after all! Asides from the benefit of playing a game outdoors and discovering lots of hidden gems within your city, you get to meet new people and take point in a spontaneous group experience. This is why we play games, not for the predictability, not even for the outcomes, but for the experience. Seeing a Resistance member failing to defend a portal being attacked by 5 or 6 Enlightened is extremely funny and rewarding.

The only way to play this game, is to socialize. Organize days to create pop-up farms, or to take down a well-linked enemy portal. Use your invites to recruit more members to your faction, then use your higher-level players to help them level up as quickly as possible. Submit new portals to stretch the enemy resources a tiny bit further out their comfort zone, and enjoy the company of your team mates!