Moving into a new house is quite a difficult process. In addition to filling out countless change of address forms, playing the game of “who will give me something I can use to prove my address without requiring proof of address”, buying and building lots of IKEA; there’s also all the unforeseen issues that crop up. As a software developer, I’m used to having a backlog of defects and improvements to work from. What if I could apply the same system to the new house? And so… TO THE INTERNET!

I first noticed that Francis Irving had been using Github for a home issue tracking system back in Spring 2012. After having a good trololol at some of the pull requests made, I realised that I’d prefer something more private. Github’s nice, but most of the functionality won’t be needed. Furthermore, there’s no way to prioritise issues on Github; something I’d quite like to do.

@paul_edwin suggested Trello as an alternative. What a fantastic system! Trello has the concept of cards, which can be placed on lists. Colour-coded labels allow cards to placed into categories. A board (containing your lists of cards) can be private and can be shared with named members. There’s no tricky configuration needed – everything is completely self-explanatory. Nice!

I created three lists to create a Kanban-like system. A fourth list for long-term projects sits outside the day-to-day tasks, for when we have the time, motivation and budget to handle them.

A secondary reason for wanting an issue-tracking system is that it can also act as a note-taking system. For example, we need a new oven light bulb. We have the make and model of the old bulb listed on the card description. Luckily, Trello also has an Android app, so you can view and edit your boards on the move. I can check which type of light bulb I need whilst in the shop! The Android app is very pretty. Long-pressing a card allows you to place it onto a list. Lists are displayed in all their full-screen glory, with left and right swipes navigating between your lists. 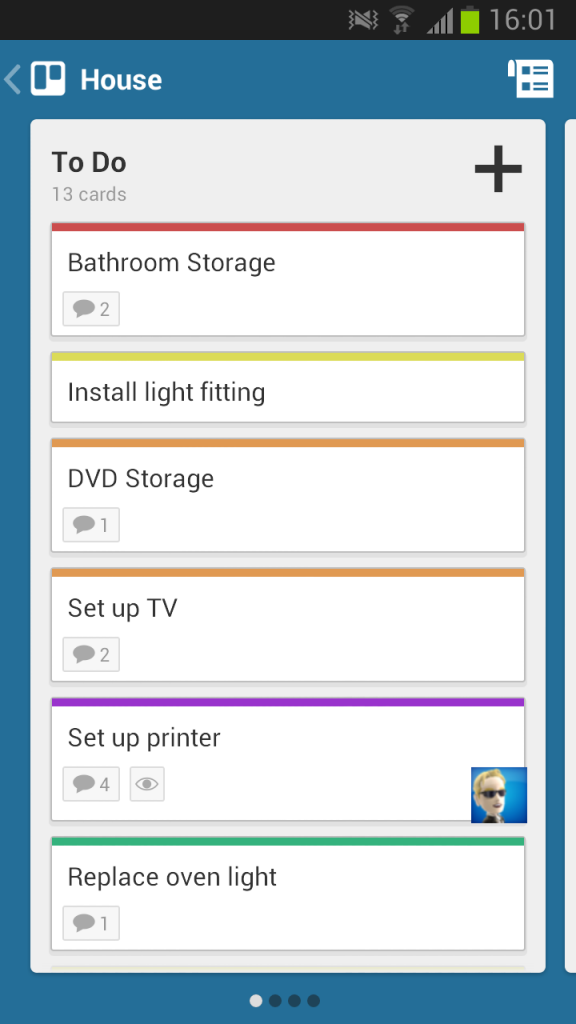 I think we’ll be sticking with Trello for the foreseeable future, at least until a system that can be self-hosted comes along. If you’re looking for a no-nonsense way of dragging your house to do list into the 21st Century, I can’t recommend Trello highly enough. Thanks once again to Paul for recommending this to me and making my life easier!