Since my last post about running, I’ve taken part in three major racing events: the Great North 10k, the Edinburgh Marathon Relay Race and finally yesterday’s Great North Run. Whilst not attempting to run competitively in the solo races, in all three I’ve competed with myself to get the best time possible.

First up was the Glory Leg of the Edinburgh Marathon Relay in May. The relay race takes place simultaneously with the marathon, over the same distance, but split into four legs. A different team member runs each part and there are changeover points throughout the course. Each of the legs is a different length, with the Glory Leg being the shortest distance. On one hand this is a blessing - you don’t have to run considerable distance and get to cross the finish line, on the other hand, you need to make sure it’s a fast effort. My work entered two teams, one for the Newcastle office and the other for the Edinburgh offics. In previous years a Scott Logic team had won the corporate challenge category, but this year the focus was on being the best office. On the day, we (Newcastle) won both on time and first to cross the finish line. I chased down my Scottish counterpart over the four miles, finally overtaking him on, quite literally, the last corner before the finish line!

The next race was in June. The Great North 10k was where I made all the mistakes you’ll expect of a racing newbie; setting off too fast, not settling into a consistent pace and not remembering the course elevation. I ran the first mile very quickly. The last mile begins with a very steep hill, which sapped most of my energy, but culminates with a lap of Gateshead Stadium. I mustered enough strength to sprint finish, to get a time of 45 minutes. Bupa’s events are well organised at the starting line – based on an estimated time you’re assigned a group of similar ability. For this race I was in Orange, the set of runners to depart right after the Elite and Fast Running Clubs groups. My mistake was to start off right at the start of the group, allowing the crowd to push me along at an unsustainable pace.

Finally, yesterday’s Great North Run. Prior to this I had ran a few 10 mile routes, and two 13 mile routes. My predicted time was 1hr 45, and I could achieve this in practice. I knew it would be tough to sustain this in the race, given the crowds and the fact it’s a tougher course. There’s plenty of uphill, including my new mortal enemy, the mile 11 hill. That said, there’s plenty of downhill too, but it simply doesn’t feel like you’re going downhill. 13 miles is a real slog, especially in the poor weather conditions of yesterday. In no way does that compare with a flyover from the Red Arrows! After comparing my times with my colleagues, I was pleased to have came first on raw time, but second on age categories. I know for next time I need to put more training in beforehand. Hopefully this will pull down that time even further! Having the atmosphere of a massive running event certainly helped inspire me during the toughest parts. Raising £400 for the British Heart Foundation was a nice side-effect too. Once again, many thanks to the incredible generosity of my friends, family and colleagues. 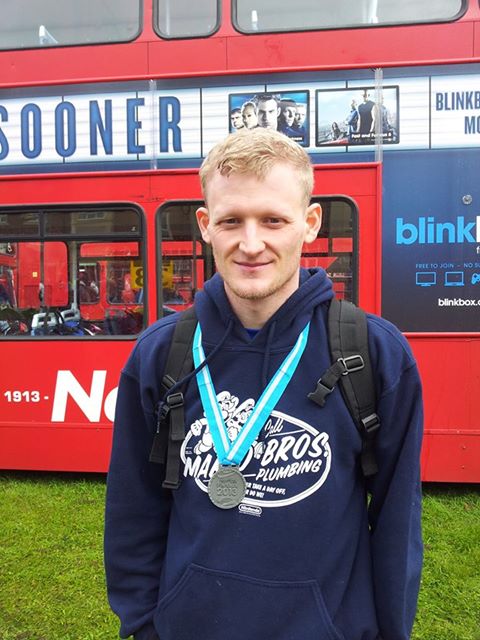 I’ve been a faithful member of Runkeeper since 2010 – the Android app is great for entry-level and its web interface is brilliant for organising activities, planning routes and tracking your progression. I built up quite a wealth of data, which I wanted to keep. However, I have always been reluctant to take my mobile phone out running with me. I also wanted to gather more accurate GPS data and heart rate data. The Garmin Forerunner 410 was the ideal choice. 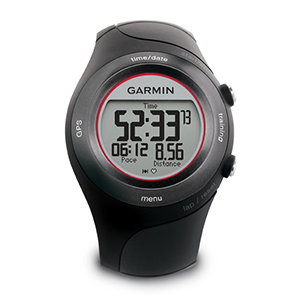 It’s a mid->entry-level GPS watch, which comes with a Heart Rate Monitor as an optional extra. The watch is fairly advanced – you can program routes, have a “virtual partner” race alongside you (the watch tells you how far in front or behind you are) and set intervals. Results tend to be accurate and I’ve never had any problems with heart rate monitor connectivity. On the negative side, it can take a while to find an initial GPS lock. I’ve also found that at the start and end of a run, sometimes during also, I get ‘spikes’ on my GPS data where my pace speeds up to faster than Mo Farah, or slower than a Tortoise. However, I’m prepared to tolerate this. I export my data from the Garmin Connect website as a .tcx file and upload them into Runkeeper. Runkeeper will strip these extraneous data points. Once an activity is uploaded, you’ll need to edit it and assign it a predefined course, should you want to track multiple runs over the same course. In future I’d like to automate this.

This year I’ve been very happy with my running progression. I don’t intend to take part in any more racing events this year other than Parkruns. Instead I will focus on improving my 5-10k pace. Garmin handily collates all of your personal bests, which I’ll display for posterity:

For me, these are solid times which reflect a personal journey from a sedantry lifestyle into one which is quite fit. It’s a great sense of achievement, but also an opportunity to relax, enjoy yourself and meet new people. Oh, and if you like technology, buy new toys ;)