Pandemic is one of my favourite board games. It’s sufficiently complex to warrant strategic thinking, but it’s also accessible enough to be taken to a party and everyone will enjoy it.

Thanks to last Christmas and this year’s birthday, I’ve acquired both expansions: On the Brink and In the Lab. I sometimes take the game to a friend’s house to play and I didn’t like the idea of having to transport three boxes for one game. Is it possible to combine all of the material into one box?

The answer is yes, with a bit of trickery.

Both expansions add some new mechanics to the base game, requiring new components (meeples, counters, buildings etc), cards and boards. That all has to go in. Additionally, On the Brink gives you five petri-dishes to store your disease cubes. In the Lab provides you with five plastic vials, to replace the wooden ones from the core game. Both of these changes are purely cosmetic, but why wouldn’t you include them?!

An overview of what’s included: all three rulebooks, the core and lab boards, plus a single copy of the bioterrorist character sheet. 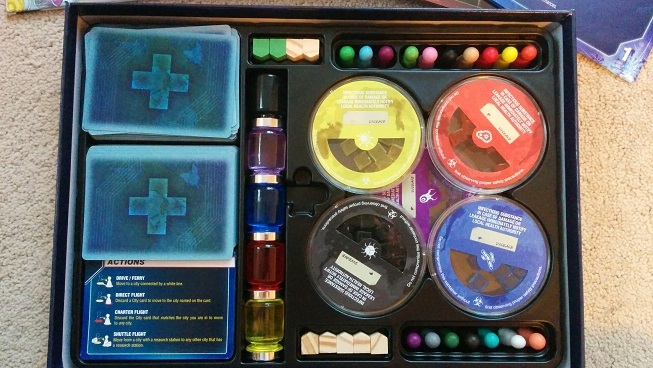 A close-up of everything combined in one box. I took the plastic insert from On the Brink (which had slots for vials and petri-dishes) and swapped it with the cardboard insert from the core box. That way everything is stored in the core box! :) There were too many cards in the player deck to stack up in their own row, so some went on top of the epidemic deck. I can live with that. All other cards, such as the lab cards, roles, events and rules, are in the third row. The blank cards are not included. 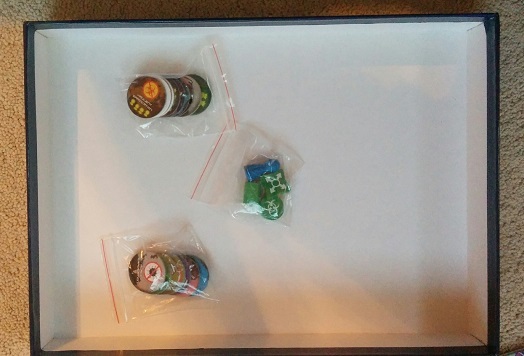 Sadly and annoyingly, not everything fits into the plastic insert. The epidemic and outbreak trackers don’t really have a place. I had one extra meeple and research station that could not fit into the allocated slots. Plus, all the counters from In the Lab had no home. I decided to cheat here, and bag them up, then place them under the insert. This requires some skilled placement, or you can draw three crosses on the box with a pencil, like I have, so that you know roughly where they go.

The box, when closed, doesn’t fully shut. That’ll be the bulk of the extra game board from In the Lab. The fit is good enough, however, to be transportable. To be extra careful you could always wrap it in a hairband or elastic band.

It would be nice if Z-man games released a larger box, which would fit all of the game components, but as there’s next to no chance of that happening, this is an acceptable compromise to me. I hope it helps you too!