I decided to enter this year's Great North Run after completing the course last year, just shy of my target time of 1hr 45. I wasn't expecting to be selected in the ballot, but I was! This year's event was last Sunday, so this post is a quick debrief of the event. 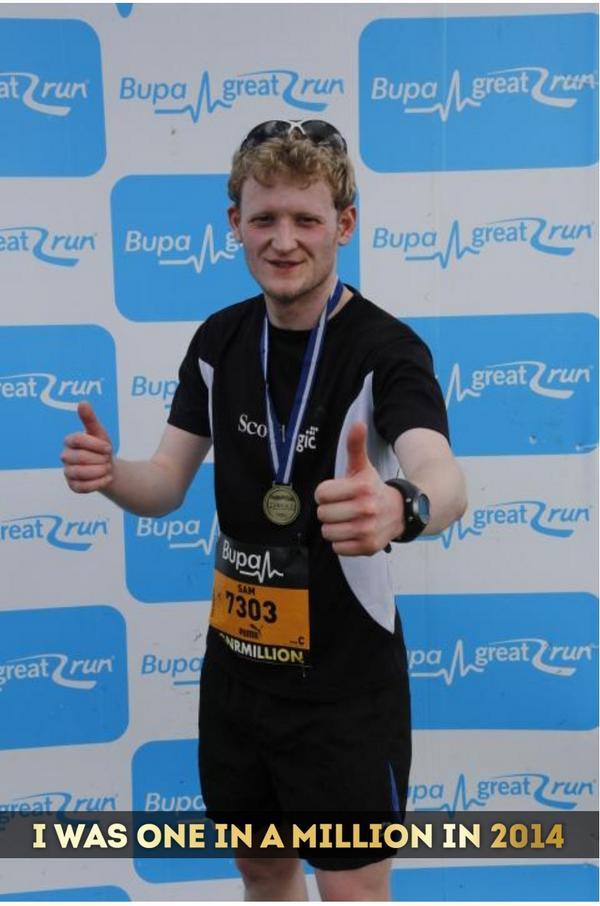 Let's start with a data-dump from my Garmin Forerunner 410 for both races:

Overall I ran faster and shaved 30 seconds from last year's time. I aimed to run at an average pace of 8 minutes per mile, and hit exactly that. Having a bit of knowledge of the course topology from the previous year helped out quite a lot, especially because it was so hot! I was doing my best to hide in the shade wherever possible, which normally meant darting across the road onto a path obscured by trees. That actually meant I ran a further 0.07 of a mile further than last year! It did mean that I knew where to hold back and reserve energy and where to go for it. I think this accounts for most of the laps where I was slower in 2014 than 2013.

After reaching the 12 miles point last year, I was virtually out of gas. This year, by holding back just a bit, I had enough energy to pick up the pace and actually finish with a sprint! I was really happy about being able to do that!

1:45:45 is still 45 seconds shy of my target time, but given the heat I'm willing to consider this year's event a success. In training runs on a roughly comparable course, I've hit 1:42:59, so I know under the right conditions I can do better.

However, the bad news is that I seem to have quite seriously sprained my foot, so walking is incredibly painful. I think this happened because of trying to run in such a way to avoid re-injuring my ankle. A few weeks back I tried to run around a dog on the Whitley Bay boardwalk and landed on the side of my foot. That cut into one of my training runs, and I had to hobble home after just half a mile! As a side rant, dogs are supposed to be on leads while on the boardwalk during summer, so if you disregard that law you're a bad person and are responsible for injuries. I should probably nag the council, because I've been also bitten by dogs there, who were not on their leads.

Should I enter next year? Bupa events are expensive, the Great North Run costs about £50 to enter, but it is incredibly tempting to go for three in a row and get under 1:45. If I focus on improving my half marathon time, I could aim to beat my Auntie's half-marathon personal best of 1:39. But I reckon that will involve some quite serious lifestyle changes, primarily dietary. It's doable if I start training now.