That's a lot of P's in the title, but following yesterday's shenanigans with the Second Reading of the Investigatory Powers Bill, you'd be right to be P'd off.

Those empty benches, there? That's Her Majesty's Official Opposition during the reading of the #IPBill. Pathetic. pic.twitter.com/Og4dOuS1jO

Suffice to say this was not reported well:

We've been here before. Back in July 2015, the Government tabled the controversal Welfare Reform and Work Bill in the middle of a brutal Labour leadership election. Labour attracted a lot of criticism for abstaining from the vote. What actually happened was that Labour proposed an amendment, which had a high turnout, although not enough to defeat the the Government's majority. Acting Leader Harriet Harman's strategy was to then abstain from the second reading.

We saw the same reaction towards this strategy, indeed it allowed Jeremy Corbyn to position himself as the 'principled' candidate. It was instrumental in his resounding victory in the leadership contest. It didn't matter that Labour voted against the Bill en-masse during its third reading, as at this point the damage was already done.

To understand why this happens, we need to look at how Bills are passed in Parliament. 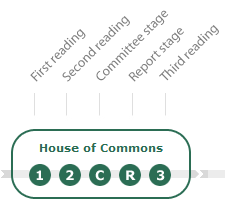 When a Bill is introduced in the Commons, it goes through several stages:

Following that it goes to the Lords, but we can stop here for now.

If you largely oppose a Bill and in all likelihood it will pass, then by abstaining at the second reading, all you are doing is ensuring that the Bill passes to the next stages of scrutiny. This is where the real powers of opposition come into force. Amendments can be tabled, debated and voted upon. You can exert better opposition by at least using the full process to water down the legislation. Should this not work, you can always vote to reject it at the Third Reading.

Of course, it's incredibly easy to spin this into something it's not. Smaller parties can take swipes at the larger parties for behaving differently. They can do this by playing on the public's general lack of understanding of the Parliamentary procedure to score points. If anything, this is apathy-inducing and not truly representative of reality. It makes for good headlines though.

Stella Creasey, who gave an excellent speech during the debate yesterday, clearly makes this point.

Good to hear @andyburnhammp say the #IPbill not acceptable in its current form - this is 2nd reading so Ctte stage key to making change!

So why didn't Labour and the SNP take the path of least resistance and vote to oppose at the early stage? The answer of course depends on the Bill in question, and your own definition of what Opposition is. Personally, opposition is not simply about block-voting 'no' in every case, it's also about ensuring that legislation that does pass is of a good quality. Many have pointed out that if Labour & SNP MPs had voted 'no' yesterday, then the Bill would have been blocked. Ambushes are always possible, but incredibly unlikely given the magnitude of this Bill.

The IP Bill is an extremely large Bill, with some good parts and some very bad parts. Overall I remain positive - opposition is still growing. A letter to the Telegraph from tech sector leaders begs for more Parliamentary time to fully understand the implications on the United Kingdom's digital economy. 200 senior lawyers described the bill as "not fit for purpose".

The Labour Party strategy has been effectively outlined by Keir Starmer:

Surveillance legislation fit for the 21st century, which strikes the right balance between privacy, security and democracy is a prize worth fighting for, and Labour will work constructively with the government to achieve it. But for that to happen, the government needs to allow sufficient time for proper parliamentary scrutiny and, equally importantly, to shift position on a number of key issues. It can expect robust challenge from Labour where it fails to do so.

The Internet outrage machine, puts politics under the microscope. There are those who deem anything other than complete and total opposition as selling-out, and do very well by promoting extreme viewpoints. But it is also clear that it is highlighting some of the eccentricities about how our democracy works. Whether you think it's a good or a bad thing, you decide. But please make sure that you're in full possession of the facts before believing that Twitter meme.